Nearly every year since 1979, a census of raptors has been taken in  late January or early February in eastern Kings County around the Cornwallis River in Nova Scotia. The count is made for one hour on a specific day with observing parties assigned to designated areas to guard again over counting numbers.  This count of Bald Eagles and other raptors is named in honour of Cyril K. Coldwell.  The areas covered and the count results for Bald Eagles  for each yeare are shown in the images below.

The Area of the count is shown in this Google Map

Cyril Coldwell started feeding Ravens on his farm east of Gaspereau along the river in the 1970’s and soon this site attracted raptors. Since those days, the number of Bald Eagles and other raptors in the area have increased. Today, many poultry farms put out offal for the raptors and ravens. The centre of the concentration is now near Sheffield Mills and that community celebrates the spectacle of hundreds of Bald Eagles with Eagle Watch special events during weekends in January and February. The following is from the March 1977 issue of the BNS Newsletter, p11

Eagles made their first appearance at the feeding station on Dec 5, 1976. From then on they kept up regular daily visitations until March 12 when they disappeared. After four days three returned and at present (March 21, 1977) are still in the area.
During the winter three counts were taken in the Wolfville Area and the numbers are shown below

A little about Cyril Coldwell

It is an honour for me to be asked to speak in tribute to Cyril.

Cyril was, as he said himself, born with an interest in birds, an interest that steadily grew through the years, nurtured by Robie Tufts, and other naturalists and outdoorsmen in Kings County. He was an old-time collector who followed in the path of that honourable tradition and the birds that he collected, he also prepared as mounts, using the taxidermy skills he learned as a young boy.

Cyril eventually took over the family farm. He was a successful farmer, but his heart really wasn’t in it. Cyril wanted to work with birds.

That opportunity came in 1972, when he was asked to be curator of the museum in the Biology Department at Acadia University. Later the museum was named the Robie Tufts Laboratory of Ornithology and it was only right that one of Robie’s proteges, or Robie’s boys as Cyril proudly called himself, should take care of it.

From the time he first climbed up on the stool beside his workbench, it was clear that’s where Cyril was meant Surrounded by a heady mix of odours, boiling pots, record books, study skins, and curious students, he was happily content. As his presence at Acadia became more widely known, growing numbers of people came to visit this remarkable man who offered simple, homespun truths while his deft hands prepared Specimens for research and teaching dressed in overalls, shirt and tie, Cyril was the venerable, rural sage and for more than 21 years he practiced the art of mentoring

There are few natural opportunities to form mentoring relationships in our present world, but on the fourth floor of biology department, this age-old, method of passing on skills, knowledge and wisdom from one generation to another, the shaping of human values, was certainly thriving. His wisdom came primarily from experience, not books. He followed the precepts of the true mentor – he didn’t play God, he practiced active listening, he was as often empathetic as sympathetic, he was nonjudgemental, and he knew that he really couldn’t move mountains.

Cyril’s work with birds of prey was truly where his heart was. He may have been among the first to rehabilitate injured birds and asword spread of this farmer-fisherman with a backyard full of hawks, owls and eagles, increasing numbers of schoolchildren, neighbours, tourists, birders and biologists came to visit him.

His farm also became an extension of the biology department, a place where students and staff, with his enthusiastic help, conducted research and banding studies on eagles and other birds. 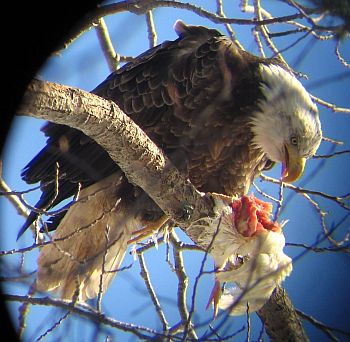 Cyril was among the first to establish a feeding site for eagles on his farm, a practice that soon spread throughout Nova Scotia and elsewhere. These additional sources of winter foods eventually led to a dramatic increase in the provincial bald eagle population. It is fitting that a pair of eagles now nest within a short distance of Cyril’s home.

And through all these years he was encouraged and supported in his work by his wife Frances and members of his family, who were drafted to feed his birds and undertake other necessary chores in his absence.

Each of us has vivid memories of time spent with Cyril, at his farm, at the university, on Brier and Bon Portage Islands, on expeditions to the Arctic and on many other field excursions. And those who have been encouraged and guided by him will take a little bit of Cyril’s spirit with them wherever they go. it is telling of his worth, that his influence has reached far beyond this country, for his students, who are not only his friends but members of “Uncle” Cyril’s extended family, now live on almost every continent.

Cyril was a devoted husband and father, a trusted and dependable friend and neighbour, a source of strength and guidance in his community. Never one for pretence, Cyril treated everyone equally and was “the same in the parlour as he was in the kitchen”. He was a compassionate, warmhearted man with a mischievous sense of humour. His high-spirited good nature revealed an exuberance for life, and it is that life which we now celebrate as much as we mourn his passing.
Cyril was an extraordinary man, a rara avis, a rare one indeed, – this beloved bird man from Gaspereau.